This is  my new studio!! At five in the morning. Me.. freezing cold, in my dungarees and fleeces sneaked out while she slept, with my coffee and crutches, in the dark to get painting .. until the hands and knees gave out with cold.. BECAUSE I WAS I SOOOOO EXCITED!!!

My neighbours might think I am a bit strange. I don’t do things in a straight line. I have appeared in the village.. with a crazy eight year old, a crazier dog, ( jury out on that one actually!)  and two lazy cats… and an awful lot of things…. and begun projects that don’t quite make sense.. until.. maybe one day they actually do.. and then.. they are occasionally pretty cool…….  (More of that in another post!)

And that’s the thing. I have come to realise …..that nothing good ever happened in a straight line. Having the spontaneous and primal desire to change and create something , is the biggest and most crucial factor. You might insert your own belief system at this point, and it really doesn’t matter how you get there, but you are being honest and that is the key.. 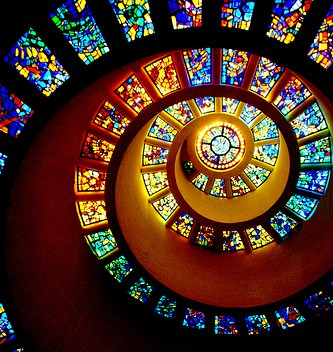 NO-one should be able to comment on your own particular brand of belief by the way. …..  as it is your modus operandi  …  ….. ! I believe there are huge universal factors which we are far more capable of channeling than we know. …… But I also think that we mistake our tiredness, sadness and feelings of being overwhelmed, as weakness, or signs that things aren’t meant to be….  . We look for reasons to fail as soon as we begin something wonderful and then pat ourselves on the back when we see how it has yet again, it has gone belly up. When things don’t go from ‘a’ to ‘b’ quite often it is all too easy to give up.   ( or cave into ridicule…)

I know there’s an end to this spaghetti somewhere!

Life is like spaghetti.  The journey to creating something amazing, albeit a dream space, a move somewhere, a de-cluttering of your life, a painting.. it is all simply about knowing it is going to happen. You’re going to get to that morsel.. sometime .. you can smell it!!!

And then the trick is.. Just ..  to get on with life anyway, sounds simple, but stop worrying..  . Continue to chip away at your dream though…. no matter what anyone else thinks, or how long it takes .. If you want to visualise it, there are numerous ways to create boards of ideas.. This does work.. cementing your vision more clearly and focusing your attention away from too many different options, which could make it happen or mess it up…… .

Making something unique and layered with the detail you want, in a creative endeavour or in a physical dimension must take time to build up. I have often been told off for the piles of things in corners ‘waiting’ to go into one of the rooms, or the new huts. Because for a lot of people, the ‘a’ to ‘b’ route makes more sense……………

I think you’re meant to buy your curtains and your matching cushions after you build your extension to your house . I do understand that, and that is perfectly ok too, but, sometimes you must get that perfect vintage pair in the charity stop EVEN before you build the room they will go in, because you will one day have that room..and then your faith in your plans and ideas will feel so much richer.

Different routes to goals and schemes are what makes life interesting , a bit like enjoying  a nice clean, observed line drawing , simple and easy to read at first glance……

And the contrasting rich emmersing process of experiencing mixed media work, creating  a layered paper collage, of found objects and treated surfaces, stitched into and gathered from various adventures…..   you need to wait to create something like that, collect treasure, experiment, and maybe until your heart is ready to piece it all together. 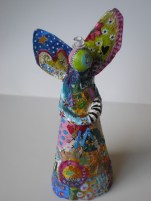 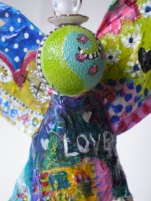 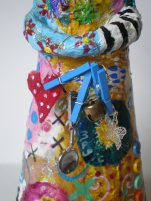 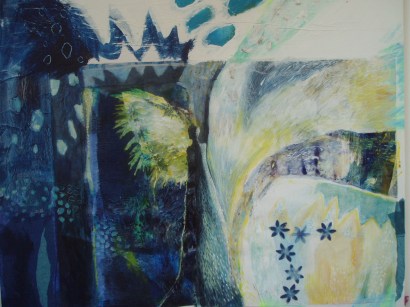 Big dreams do take longer.  You stop and start. School runs and Supermarket shopping get in the mix and the route gets wiggly. But you can’t give up. My belief is, and I am speaking from experience, that an artist might go months or years, with only their sketchbooks as pathways to their souls : but the thinking, teaching, planning, talking, sharing and being all the other people that they need to be,  is still creating and feeding the resource of you- as- an- artist. . ( This is more often a mum thing, as I have lost count of the conversations I have had about how hard it is to fully relax and lose yourself in artwork when you still have to cook the tea/look after the family/iron school shirts…….. 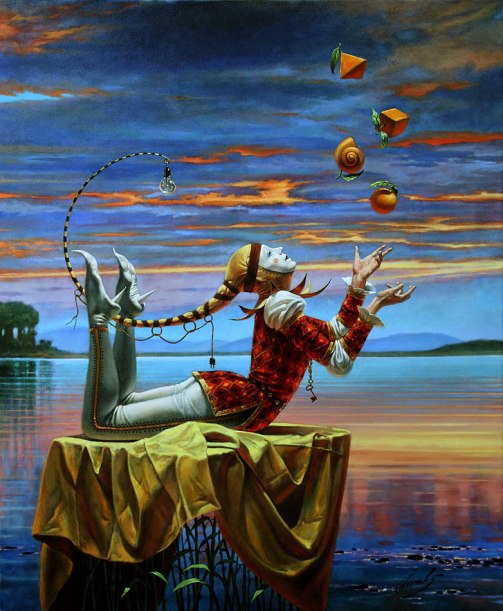 but I am sure, this will apply to some Dad’s, and folk with other dependents too)  The key is not to let the kernel of desire die. Feed the ideas, and drop them into a box of plans for your dream, no matter how tiny it may be.. write things on napkins at the soft play cafe or the garden centre:  print off pictures, let the dream know it is still there. Like a dragon feeding, being fed and watered it will keep growing and evolving, and one day come to fruition.. a twisty turney journey of unexpected adventure, which you will ,I hope tell me all about when we next meet. There were a thousand days and a million moments over the last five years when the odds were so stacked against us, it seemed like swimming in toffee. But the kernel of trust and belief stayed in place (somehow!)  It is sooooo hard not to believe the doubt in someone else when they ridicule you. But remember it is only their fear. Do it anyway.. then invite them round for tea!

You never know what those little feet are doing under the water… How often do you wonder what people would think if they could see the strategic mechanisms in place just to enable you to function. ! We all judge each other and maybe, if we think about it, we could do better trying to stop beating ourselves up first.!  Nobody knows what horrors that stranger left at home, what insult they might be reeling from, or disorder they are managing or pain that grips them  every four hours when their meds are wearing off..

A few years ago I had a big skin cancer removed from my nose. What started as a tiny annoying dot, was underneath my skin a mass of cells doing the salsa to the size of about 10p (they didn’t know that until the forth surgery when the zigzag skin graft operation revealed all.

I’d never thought about my nose before . Or what I looked like really. But other people had. My entire life, I had been on the receiving end of negativity because I was this fairy person, who looked a certain way, and was friendly too (Oh no!! Something MUST be wrong) So I was regularly on the receiving end of barbed comments, jealousy and hostility, which, (it wasn’t until later, I realised, ) was ultimately  the cause of my daughter and I to be in a supported accomodation at one point.. …yes.. often it is those closest who are our harshest critics, and stop us growing.

It is so easy to see a seemingly nice thing and want to crush it, name it, change it, question it or judge it. There are many psychological reasons, to want to control our tribe, to name what we don’t understand and to label. People behave instinctively, and we put each other and ourselves into box after box.

I had always considered myself to be a good person, but I was scared. I was insecure probably and I thought deep down perhaps, that the reasons people were unkind was because it was deserved. However.. when I  had to literally cut off my nose to spite my face, I can say that it was the start of valuing the person hiding in there..

Leah and I made a short face-book video after one particularly emotional experience.  I was on the way to teach children in an Art class at a community Centre. We stopped on the way to buy some cookies. Leah was with me. A man stopped in front of me ( with my stitched up nose ) and said “Oh my God. !! ” He just stared at me, and then walked away . I froze on the spot. I couldn’t move or breathe. He had reacted out of fear and ignorance, but all the bravery I had felt in getting out the door that day, with my scars and stitches.. evaporated… I thought I could do this…. But right there ..I lost power completely.

This story could be about that man, but it was actually about my daughter.  She took my hand and the cart and gave me a hug, telling me I had to keep walking. Because she said, you don’t have any choice. The kids are waiting for us, you still look beautiful, and I will help you..

We made the video to say thanks to the friends afterwards who became family, and who continue to be. The kids in the class barely noticed my Frankenstein face! Being vulnerable, physically and emotionally is a tough tough thing, but I liked my face then, I like it now. It’s my face.. what else am I going to do?! I feel more at peace, strangely because I have a less perfect nose. But it is a shame that the at -ease Liz who has scars and disabilities, couldn’t take hold of the young Liz and say.. “YOU are ok right now, and will be later, and will be despite other people’s insecurities. “It took all that to know all that. ( video will be posted on liz at beach hut fb page soon)

Some people look at me now and see one person, with certain clothes or hairstyles some will give me pitying glances and half smiles when they see my eight year old shove me about in the wheelchair on our holidays. Extreme versions of the same me. What I feel like most days is that there is a lot more going on unseen than the tiny part we let others see.

Some days when your limbs don’t work, or your hands get stuck, or the cold paralyses your joints, those are the days where the triumph of just getting being dressed, smiling, or picking up a pencil, that is success . Personally, as someone who expects a lot of myself, despite the limitations…  I am mumbling in my own ear here too!

Take a moment to consider the swan, to get where we need to be, to glide through it seemingly without effort, takes a lot of planning, lipstick, tears, tantrums, and support from other people. We are who we are, and our battle scars are our proof of our strength, not our ugliness. 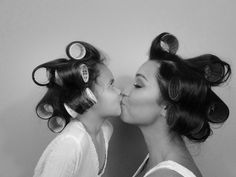 The beautiful but wonky make up on that old lady we dismiss as inappropriate, might have cost all her pension. And the strange thing is, without your voice, yacking on about other people, your head goes quiet. You stop thinking they are doing the same to you. They become potential friends (well, most-…..you should still exercise your instincts !) This post is for a friend who has recently undergone similar cancer treatment and is feeling a little wibbly. M- you are amazing, brave, strong, and beautiful. You are more sparkly with your battle scars and you can do this.

As for me…..You can judge me all you like, but it is a nice thing to know that finally, I won’t be judging myself. !